This is the first post I have tried to draft from my cell phone, which was the only electronic device I could get my hands on today. I apologize in advance for all the swiping and/or autocorrect errors I might fail to find and correct once I got to use the computer.

In Portugal, many museums are free on Sundays from 10-2. David figured out which area had the greatest concentration of these, so this Sunday, we decided to go into Belém .

We set an alarm so we could get out there by 10 and not waste any of the free hours. David got up promptly. First he asked Quinland and me, very sweetly, to get up. Then he fed us each breakfast in bed. Finally he commanded us to get up, now. We scurried out at that point.

We got down to the Metro at 9:45, but we still had to connect with a tram to get out to Belém, which is a few miles west of the center of Lisbon. At least we caught the train… two guys ran for it, one threw his bag in front of him to keep the doors open, then tried to pry them open enough to squeeze through… but the doors closed and his bag rode away with us. We were only going one stop before transferring to the tram, so I left it prominently on a bench for him to see when he caught the next train. It was so early, there was no one around in the station, either to watch out for the bag or to mess with it.

We hightailed it to the tram stop, where a zillion tourists were waiting for the tram to Belém … which did not come. Everyone was asking each other if they knew Portuguese, or if they knew that the deal was, but no one did. Various splinter groups would leave periodically and start walking to the next station down the street to catch the train out there. I asked my Portuguese brother, who walked by with a beer at 10 am, if it was the right stop, and he confirmed that it was. After waiting almost 30 minutes, an awfully frustrated David hiked down to another tram stop to discover the truth. He was told, “The tram does not run this morning.” Every Sunday morning? Just today? It was impossible to tell, but obviously we would not be catching it here.

We shared the news with the people at the stop, then started our own mass exodus to the train station.  We barely made it, and were glad to see that many of the people who had made the decision to leave earlier were on it with us.

As the train pulled away, we suddenly realized why the tram was not running. Starting and ending in Belém – and following much of the same route as the tram – was… get ready… the Lisbon Marathon! Yes, we were about to go to Belém, temporary home of thousands upon thousands of sweaty runners and discarded water bottles. (I grabbed some caps off the ground for another set of pieces for Ridicula. David and Quinland distanced themselves from me quickly, but I have no embarrassment gene.)

In David”s words, the experience was of visiting Belém was 80% different than what we had anticipated.

After a picnic snack of Pastéis de Belém (lovely custard pastries), we headed into the deep, dark National Coach Museum. Quinland was instantly bored. Perhaps starting her with three museums she loved set the bar too high. I was thrilled by the place, as I could picture all sorts of Jane Austen characters dressed in the uniforms and riding in the coaches. Did you know that the word “coach” comes from the Hungarian town of Kocs, where the first vehicle with a body hung on leather straps was produced? Neither did I. This is the kind of info that I find endlessly fascinating. Because of this unfortunate tendency of mine, David and I have a pact to let Quinland set the pace in museums. My practice of reading every word on every sign, even in languages I do not speak, can be a wee bit time-consuming.

Next stop: Mosteiro dos Jerónimos, the Jerónimos Monastery. We couldn’t tour the church, as they were having Mass, and the cloister didn’t interest Q much until we put the fancy new camera in her hands. Then she disappeared, moving to every corner of the place, discovering a gargoyle shaped like a grasshopper and the best place to see the courtyard from above. 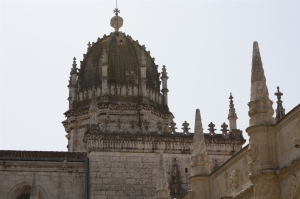 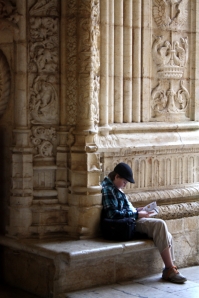 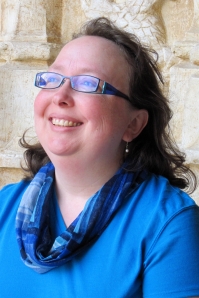 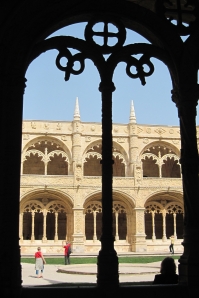 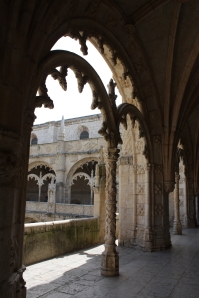 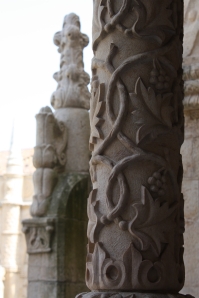 We stopped in the park on the way to the Belém Tower (Torre de Belém). We have a little foldable frisbee, and D and Q played while I snapped photos and rested. 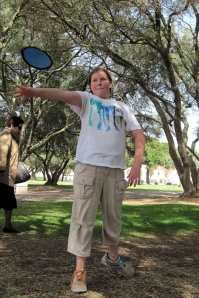 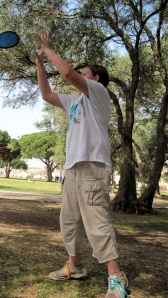 When we got to the Tower, we all had a bit of a fright. The curving staircase – with its worn, slippery stone steps – had no handrails and was barely wide enough for one person, yet people insisted on going up and down simultaneously. Yikes. It was worth it, though. The views were spectacular. The basement area had such a low ceiling that we practically had to crawl through the doorway. Luckily, there was a skylight. 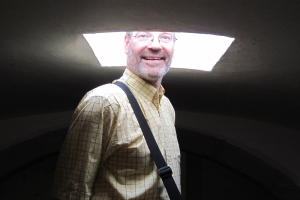 Since it was after 2 by this time – and we had saved enough money to balance out the oceanarium charge – we had lunch at the great cafe at the Museu Coleção Berardo, the Berardo Museum of Modern and Contemporary Art. It had a cafeteria-style line, but with gourmet food and desserts. Yum…

The Berardo had an amazing temporary exhibit called The Art of War, featuring WWII propaganda posters from the U.S., Germany, France, and a few other countries. I got to see an original copy of “If you ride alone, you ride with Hitler.” (Check that one out on Google images.) The exhibit ended with a propaganda film. I told David I wanted to watch it, so he took Quinland out to see the regular exhibit. When I didn’t meet up with them after more than 30 minutes, they came looking tor me. Luckily, I met them coming out. I’d fallen asleep watching the movie. It’s now official – I am Zumu. 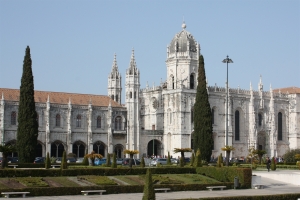 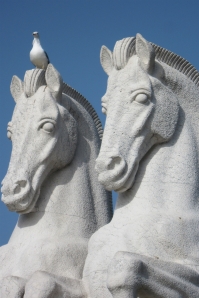 We were all exhausted, as usual, so we strolled through the park back to the train station. It was interesting to see all the local people in the park, having picnics, playing soccer, making out in the grass… yeah, I was surprised how many young couples there were, taking advantage of.. the lovely weather. We stopped at the Pingo Doce supermarket in the train station, loaded ourselves up with groceries, and trudged home with heavy bags and heavier legs.

I fell instantly to sleep and slept through dinner, waking up once to taste a lovely bruschetta Quinland had made. Then I woke up, D and Q went to bed, and we traded places so I could get on the computer. Of course, I am writing this blog post at 2:03 am, I have an alarm set for 7:15, and I will probably fall asleep in public again tomorrow. It seems to be a never-ending cycle so far.

Expenditures: Train to/from Belém, five Pastéis de Belém (we each had 1 and 2/3; why did I not just get 6?), lunch at Berardo cafe, groceries.

Experiences: Talked to tourists of many lands; saw an ungodly amount of trash and wondered why runners would litter (do I ascribe some environmental consciousness to those who run out in our environment?); finally tasted those pastries; learned all about coaches; climbed scary steps and saw cool views; learned about rationing and war bonds and saw horrible, tasteless caricatures of the enemy – from both sides.