We started the day with some serious sleeping.  I have no idea what makes us so tired in Portugal. Jet lag? It’s kind of late for that. Way more walking than we do at home? Undoubtedly. Staying up late on electronic devices? More likely.

We had decreed this day to be a work day. Miss Quinland worked on schoolwork with David while I alternated between blogging like a maniac and confirming our lodgings in Munich and in Hannover.

David was stuck trying to do work on the Kindle. It does get internet stuff and is fine for reading things online, but it is a serious pain for actually posting anything. Too often, you write a whole post and when you go to actually post it, it all disappears on you. This may be operator error and not a Kindle flaw, but either way, it’s a pain.

In the evening, we went to Game Night at Passion Fruit. This would be our last chance to see many of the Lisbon gamers we’ve gotten to know. When we got there, we played a couple of hands of Ligretto by ourselves. David got into a game Trajan with Sergio and a couple of new people, while Quinland and I played Stone Age with Philip (with whom David and I played Agricola at the stadium). Luckily for me, Q snapped some photos with her iPod: 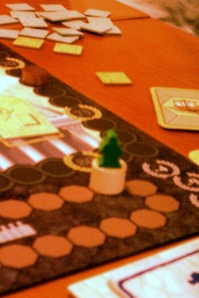 Quinland and I had a fabulous pizza and salad dinner with some incredible caramel-soaked cake for dessert. If I knew the name of it, I would order it all over the country. It was amazing. David was still playing his game, so he didn’t eat with us; in fact, he never ate dinner at all. Gaming opportunities come up far less often than eating opportunities.

I got to preview the new Agricola “World Championship” deck, which was very exciting for me. The cards are pre-formed into hands of supposedly equal strength. (Or is that “supposably”?) I also inadvertently snubbed Nuno’s very kind wife, Helena. She came and greeted me so nicely when she arrived, which – sadly – was right at the exact second that I was freaking out because I thought I had completely killed my cell phone’s wi-fi capabilities. I hope my apology and subsequent discussion of the joys of Setúbal and cuttlefish convinced her that I sincerely enjoy her company. We ended up having a lovely conversation.

David and Quinland set up a game of Modern Art and got a new gamer, Zé, to join in. He had only been in Lisbon for a month as an intern fresh out of university, and had never come to Passion Fruit before. He was funny and friendly and charming, and – best of all – willing to discuss all our Portuguese language faux pas. We followed that up with a game of Tichu, in which poor Quinland – who plays Tichu every single day on her iPod – was partnered with me. You play until one team scores 1000 points; let’s just say that we were beaten by more than 1000. Yes, it is possible to end up below zero.

By this time, we were all pretty tired, so we played a definitely giddy and almost certainly too loud game of Ligretto with Zé. I fear that his impression of Game Night at Passion Fruit may end up being a bit skewed.

We took the late-night subway home. David and I proceeded to stay up until 5 am on our respective electronic devices while Q, thankfully, slept.