On Tuesday, at long last, we made it to Sintra. I love Sintra more than I hate RyanAir’s packing requirements. That’s a lot. (Not, mind you, alot.) So much, in fact, that we took about 10 million photos and this one day is going to be spread over at least three posts, just so I don’t overwhelm you with the love.

We got up in the morning and took the Metro to Saldanha to pick up our rental car. A strange thing happened on the way to the rental agency. The night before, some of our Portuguese friends had made a special trip to Game Night to say goodbye to us, and were disappointed that only David was there (not realizing that we hadn’t been taking Quinland there because it was a smoky bar). As we popped out of the Metro and looked around for the Avis office, we heard, “David!” Looking up, we saw Sergio walking down the street on his way to work. He got to say goodbye to me and to Quinland, after all.

The guy at Avis with the Joe Jonas eyebrows (my interpretation, not Quinland’s) suggested we upgrade from the version of our car that used unleaded gas (very expensive in Portugal) to the diesel version, which would also come with free GPS. We did it, and it totally paid off, financially and GPS-ly. Yeah, I made that word up. But we loved that GPS woman and her way of saying, “LEAve the ROUNDabout at the FOURth EXit.” She got us out of (and into) many a tight spot; it’s incredible how many sogennante “streets” in Portugal feel like you are pulling into someone’s way-too-narrow driveway.

We got to Sintra before the crowds became heavy, parked, and headed straight for the Palácio Nacional de Sintra. (Remember to pronounce that Palaci-oo in the Portuguese style.) We were warned at the ticket counter that there were “over 100 steps!” so we were prepared for a hike. This palace, which is Sintra’s landmark, is dominated by two huge chimneys; standing in the kitchen and looking up those chimneys is awe-inspiring. The first historical reference to the palace dates to the 10th century, when it was the residence of the Moorish rulers of the region. It has an incredible variety of rooms – some Gothic or Manueline, others in Moorish style, and many with gorgeous azulejos — which date to 15th- and 16th-century building sprees. It also has a garden where the princes used to play; Quinland was appalled by its tiny size and seeming lack of anything to do. We spent some extra time at the palace chapel, where Q was doing some sketches of the ceiling design for some future artwork.

This place rocks. I will cut the commentary and let you see for yourselves. More on Sintra in the next post! 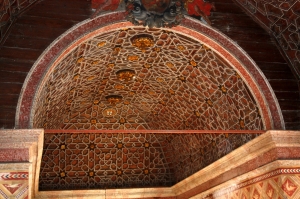 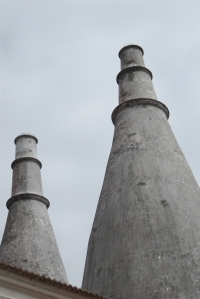 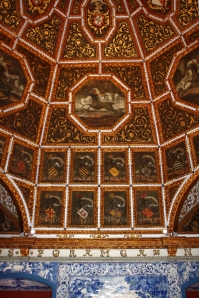 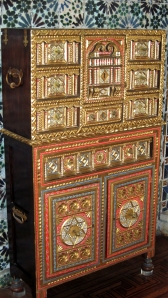