David is a good planner and finds us all kinds of crazy things to do. Luckily for us all, he discovered that – on Thursday mornings only – the largest open-air market in Portugal is held in a little town called Barcelos, and that Barcelos is only 23 kilometers from Braga. None of us wanted to miss it, so we jumped up, showered, and left without breakfast, figuring that we could always get something at the market. (I need to note that the hotel shower in Braga currently ranks as our favorite shower of the trip: endless hot water, decent spray, good-sized tub – what’s not to like?)

As soon as we entered the market square, what did we find? The pastry stalls, where pastries of all kinds were being sold by weight. We got a big bagful for only €1.50! Breakfast is served.

The market was truly amazing. The corner where we entered was focused on vegetables and meat, but there were other sections in the food market specializing in fruit, bread, and fish. There were tables piled high with bacalhau, which (ironically) was being unpacked from boxes shipped from Norway.

The animals that were being sold were surprisingly docile. Little bunnies sitting in buckets, chickens hanging out in plastic boxes and crates, just waiting… to go to their doom.

From the food market, we moved into Housewares. If I were outfitting an apartment in Portugal, I’d come here first! There were a zillion stalls filled with everything you could possibly need. 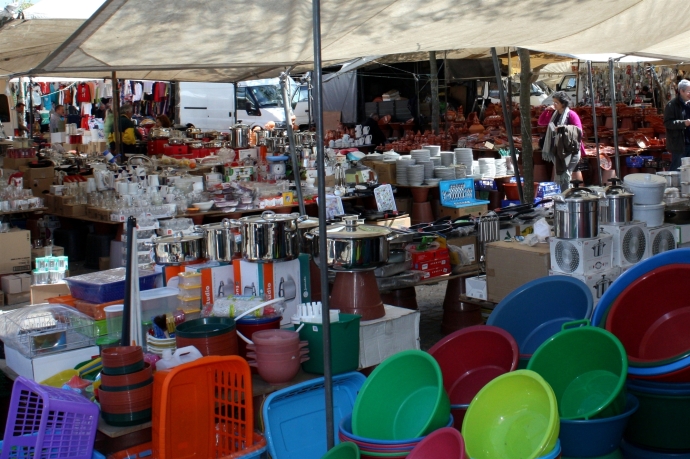 You could even get a pet, if your home was lacking one of those!

After Housewares (and a quick trip though bootleg DVDs, clothes, and shoes), we came to Arts and Crafts. Suddenly, we were surrounded by roosters.

The Barcelos Cockerel is one of the symbols of Portugal. It dates back to a legend that said that a pilgrim on his way to Santiago de Campostela was arrested and falsely charged with burglary. He stated that he was innocent, and that if he were, the roasted cockerel on the judge’s plate would get up and crow… and it did. Now the rooster is a good luck symbol in Portugal. I tried to limit myself to photos, but ended up buying a wine stopper with a little rooster on top as a souvenir.

Speaking of souvenirs, Miss Q picked up a couple of things for her friends.

She also found a little something for herself! Behind the Arts and Crafts area was a large area devoted to carved wood things of all kinds. Yokes for oxen (real ones as well as decorative ones), wooden shoes, bellows and bowls… and slingshots. Unbeknownst to me, Quinland has always wanted a slingshot. She has one now. She bypassed the gaudy ones with PORTUGAL emblazoned on them, and chose a tasteful one handcarved from a forked branch.

After visiting Barcelos, we journeyed on to a little town called Tibães, to visit an old monastery that is being restored. It was lovely and deserted, and I took so many photos there that it has to get its own post. Stay tuned!