One of David’s BGG contacts is another guy named Pedro, who is a Porto native (in fact, I later had an aerial view of the very house in which he was born). He generously offered to take an afternoon off work and take us on a walking tour of the city. I was a bit nervous about walking all afternoon, so I spent the entire morning searching for massage places in town that might be able to take me the next day, our last day in Porto.

Pedro was, quite simply, a walking-talking encyclopedia of information about his fair city. He walked us all over creation and then some. Our first quick stop was a food court in the mall, which had recently been remodeled so that each restaurant was shaped to look like a building in Porto. Then we were off to see the buildings themselves. 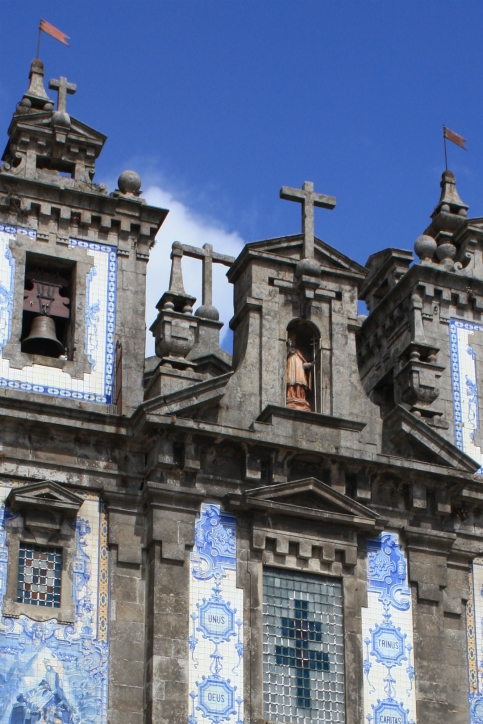 We walked through the downtown shopping district and saw old shops covered with azulejos (traditional tiles, for those of you who missed our trip to the azulejo museum). We went into a very cool historical open-air market, as well.

Speaking of azulejos, check out these next two photos of the Porto train station. Yes, you heard me right: train station. It was unbelievably gorgeous.

Here’s a close-up look at some of the beautiful tiles, which depict the history of the city.

We walked past the cathedral (Sé do Porto), but decided not to go in, as Q had had her fill of churches in Lisbon.

You can see Pedro explaining all kinds of stuff to David. I’m not sure what he is saying there, but did you know that the old Latin name of the settlement was Portus Cale? True story… that’s where the name “Portugal” came from. 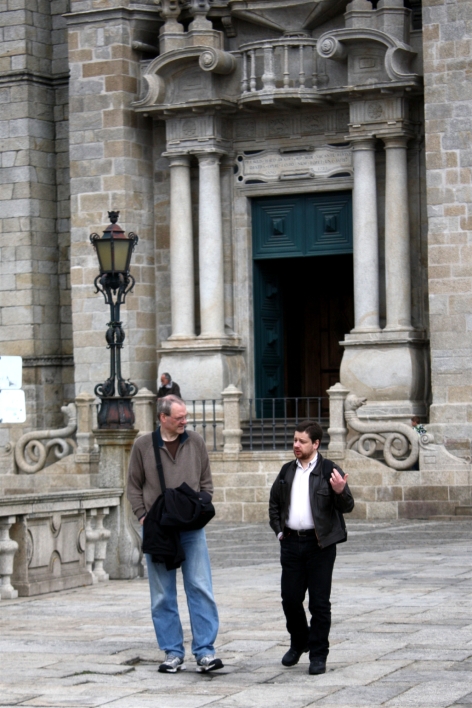 We learned some more about Porto’s grudge against Lisbon, too. Apparently, when the Castilians had Lisbon under siege in the 14th century, Porto sent all their meat to Lisbon on a supply fleet so they did not starve, and the people in Porto lived on tripe. Instead of being eternally grateful for the help, Lisboans derisively called the people from Porto “tripe eaters.” Needless to say, this still rankles (because they still do it) after 700 years.

From the Sé, we walked down, down, down, down to the riverside, which is an interesting mix of the modern (check out that square fountain!) and the historical (more azulejos!).

By the way, I am planning to launch a campaign to make Portland a sister city with Porto. Not only are their names oh-so-similar, but one of Porto’s nicknames is Cidade das Pontes. Can you believe it?! The City of Bridges! Bridgetown! Yeah, it’s pretty much meant to be.

Speaking of bridges, here is Q in front of the Eiffel Bridge, (built by Gustave Eiffel of Tower fame). There was a pontoon bridge built in this location in 1806, but when the city was under siege in the Napoleonic wars, it collapsed under the weight of fleeing townspeople. Either that, or it was sabotaged, depending on who you ask.

From the quays, we had a lovely view of the port cellars, barges, and visiting yachts across the river in Vila Nova de Gaia (the “New Town”). Each one of the cellars has their name in huge light-up letters across their rooftop. It’s very cool. (Now, it’s confession time. Although we love port, and would have loved to go and have a tasting in the port cellars, we never made it over there. Our time in Porto was the shortest visit of the trip – only three days! – and I was pretty wiped out. We will definitely have to do it again the next time we come back to Portugal, or when we retire to Portugal for the winters after winning millions in the Powerball lottery.)

We took the funicular from the riverfront back up to the main level of the city, then walked past the grand boulevards to the tallest church tower in the city, which has stairs you can climb to the top. D and Q declined, of course, but I decided that I wanted to see the views, and I was sure I could do it if I took the stairs slowly. The views were incredible. 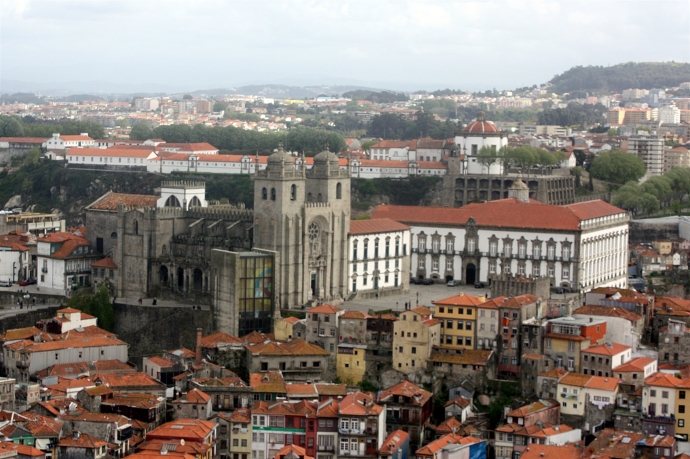 There were young students with music books taking lessons on how to play the church bells, so we were treated to non-stop bell music. (This was not such a treat when we were right beside the bells.)

After a bite to eat at a famous student café near the tram line (where we were met after lunch by Pedro’s lovely girlfriend), we went to have a look inside the third most beautiful bookshop in the world, Livraria Lello.

It truly was magnificent. I decided that JK Rowling must have been inspired by this shop when she pictured Ollivander’s wand shop in Diagon Alley. We only have the photo of the outside because they employ a man to do nothing but yell, “No photos!” at tourists, but if you just type “Lello” into Google Images, you will be blown away. Check out the stairs. Wowza. (Don’t ask me why all those people were allowed to take photos.)

So… remember how I was worried about a walking tour when this day began? Remember how I decided I could handle climbing to the top of this tower?

Guess what? I was wrong about the whole tower thing. By the time we got out of the bookstore, I was dying (and mad at myself for good measure). I asked Pedro and his girlfriend if they knew of any massage therapists I might be able to call. She had a contact; she called him, and he said that if I could come to his home studio that night, he could take me. Hooray!

Now we just had to kill time until then by finding a place to eat dinner. The place Pedro knew of wasn’t open, but we found a good (but somewhat spendy) restaurant down by the riverfront. I was enamored of the way they presented the check in a plain wooden box with a lid. Hmmm… it was sort of like a small jewelry box to which one contributes some of one’s own riches. (I’m totally sticking with “one” since the Queen’s Jubilee.)

After dinner, we all walked to Pedro’s car and drove over to the massage friend. The others sat and talked in the living room while I got worked on in the home studio. Unfortunately, I was so swollen from walking all day that he was reluctant to do much work on me, but I did feel a bit better.

I asked Pedro to take me straight home after that, but Q and D played a game of Haggis with him in the evening, at the café where Pedro’s group usually plays.

Expenditures: Not many, actually. Dinner out, the funicular ride, and a massage.

Help save a neighborhood landmark (and a place where, over the years, Quinland has probably eaten breakfast more times than at home). https://gf.me/u/zbjk8d
Two of my favorite things about my boss
Yeah, Bonesy. Chill out.
This little one never went to sleep without a major fuss (screeeeeeeam*😴), but he always woke up happy and ready to play.
Q used to open every unlocked cabinet and drawer in the kitchen and take things out. I got fed up with that, so I put every little plastic thing in one drawer, showed it to him, and told him, "This is the only stuff you get to play with. This is QUINLAND'S drawer." So he opened it up and got in.
Find yourself a baby that looks at you like this...
Loading Comments...
Comment
×
<span>%d</span> bloggers like this: