Travel days are such a bear. As usual, the cheapest flight was the earliest flight, so we got up at 4:10 AM since the taxi guy was arriving at 4:30. We left Christine on her own in Barcelona for a day, since her flight home wasn’t until the evening. (Goodbye, Christine! Thanks for spending the week with us! See you in Ireland in a couple of months!)  The taxi guy was so efficient that we were at the airport by five; he did not talk, but the music on his radio was pure 70’s goodness.

This flight on Vueling was the antithesis of our last disastrous flight (into Barcelona).

We had no idea how lucky all of this was before that other flight.

Not all of us arrived completely unscathed, however. Where Ryanair had merely damaged the new red bag, Vueling ripped the entire wheel carriage and wheels off, which meant that our previously-rolling bag would now have to be carried. (That’s what we get for a 25-euro bag – 2 uses.) My new plan: put the bulk of the weight into the big black rolling bag, strap the red bag to it, and wheel them together as one.

We landed in Munich at 9:00, and our lovely host Herr Bremerich said we could come check in directly. Hooray!  We took the s-bahn from the Flughaven to Ostbahnhof, transferred to the U-5, got off at Innsbrucker Ring and walked two short blocks to the apartment. It was very cute and had everything one could need: toilet paper, oil, salt and pepper, and dish soap. Hooray again! It was good-sized, too: the apartment could have slept seven people, if we had had seven people and they were very friendly about sharing beds.

We knew that most of the day could be spent traveling and getting settled, so instead we dropped the bags, repacked a daypack, and headed for Dachau. None of us had eaten, so we raced to get a bit of food – lovely pastry and incredible onion quiche – before catching the bus out to the camp.

Talking about broken luggage and drinking beer in the same post as going to a concentration camp seemed uncool, so I have put the Dachau photos and text in a separate post.

On the bus back to the train station, we spoke with a group of school kids on a tour from Canada, and with a man and his son from Seal Beach, right near where I grew up. We took the train to Marienplatz, the very heart of Munich.

The plan? To take Quinland to a wonderful dinner at Weisses Bräuhaus. The reality? To dine along with a zillion Bayern München fans (as the side was playing Real Madrid that night in the Champions League semi-final). In fact, the place was booked, but we managed to squeeze in to a “Reserved” table if we promised to eat and be out of there before the reservation people showed up.

I was so happy to be there. Besides having my favorite Schneider Weisse beer, the food is amazing. (When we lived on the Chiemsee, this is where I asked to go for my birthday dinner.) We introduced Q to the wonder that is Semmelknödel (Bavarian bread dumplings). Yum… 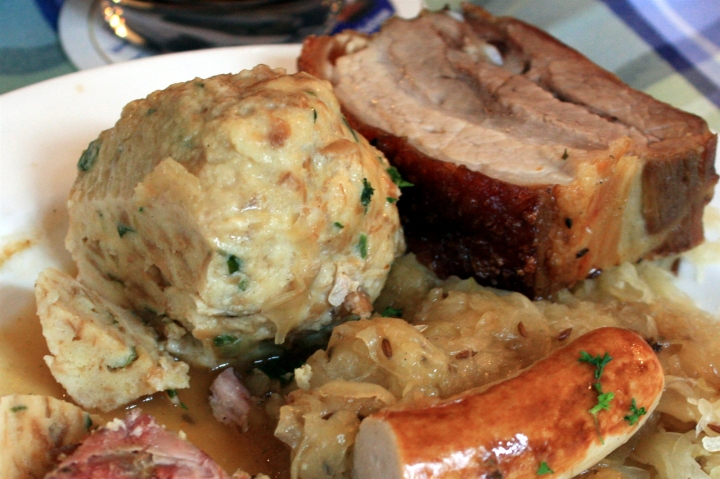 We dropped by Kaufhof for some food for the morning, then went home. ‘Twas the night before steroids, so while D and Q watched some of the soccer game, I read, took a dose of the drugs and a sleeping pill, and headed off to bed.

Experiences: A good flight, for one! Quinland’s introduction to Germany: visits to a concentration camp, to the center of Munich, to my favorite Munich restaurant, and to a German grocery store (and a chance to hear some wild and LOUD German football fans!).

So... I threw together a fantasy team for #euro2020. In the last 15 minutes before signups closed, I Googled "top euro fantasy picks," skimmed a single article, chose some of the author's suggestions til I ran out of fake money, then just winged it by making sure I had someone from England, someone from Portugal, and a cute player or two.
It didn't make the cut, but we had to play it once before his cute old lady and the quite thin clown left the building.
Here's a boy I met in college. (Reader, I married him.) We had a very cute baby. They looked sooo much alike when Q was little. I always wanted to frame these two photos side by side.
Go ahead. Make my day.
Outtakes from Bonesy's portrait session...
Bonesy had his senior portraits taken on our walk today!
Loading Comments...
%d bloggers like this: